Though I’ve lived in Japan for almost 9 years, I’ve luckily never experienced a major earthquake. Sure, we’ve had the odd minor tremble here and there but during the major disasters of the last decade (Tohoku in 2011, Kumamoto in 2016), we were always living in a distant part of the country.

In a country like Japan, however, that’s no reason to get complacent.

Around 1500 earthquakes strike Japan on a yearly basis. Often, some part of these islands is shaking every day. Any one of these could be “the big one”. If it was, would you be ready?

Japanese communities often hold bosai drills or special events to highlight the need for disaster preparedness. But they can’t prepare you for what it feels like. And that is where the Ikebukuro Life Safety Center comes in.

Despite its unexciting name, this place is shakin’. Quite literally. It’s home to an earthquake simulator that allows participants to experience an earthquake the same magnitude as the Great East Japan Quake in 2011 (magnitude 9, shindo 7 on the Japanese scale of severity of the shaking).

There are two main “experiences” that can be booked at the center –  the basic course and the short course. Both are free and don’t require a reservation unless you’re in a group of more than ten people. The courses are conducted in Japanese only, but we had a few members in our group who didn’t speak much Japanese, and the staff did their best to accommodate.

The movie itself was surprisingly watchable, and more interesting than I expected. It didn’t provide much in the way of guidance for an earthquake; instead, it seemed to be a historical timetrip to major earthquakes and disasters of the 20th century. The anime-style film has subtitles in English and Chinese and lasts around 25 minutes.

After the film, the group is led upstairs to the simulator. It’s a plain looking space, with a simple table and four chairs. Groups take turns rotating through the simulator and the severity of the quake is toned down for younger participants or those who request it. 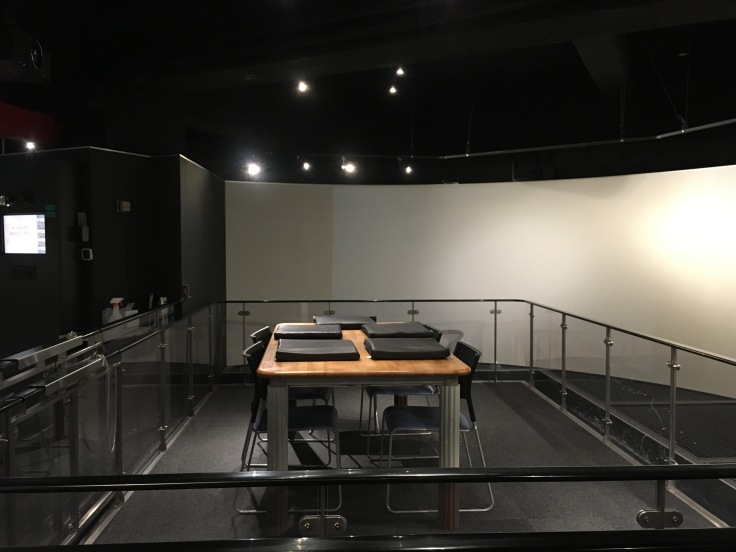 I went in for the full experience – 45 seconds of magnitude 9 earthquake designed to mimic the exact pattern of the shaking from the Great East Japan quake in 2011. All I had to do was cling to a table and wait it out. The real quake continued for three times that length and the shaking in Tokyo continued for 15 minutes.

Why does an experience like this matter? It prepares you in a way that lectures and pamphlets cannot. Some people freeze in times of stress. Some people underestimate the potential severity of natural disasters. By experiencing one in a controlled environment, you may get an idea of what to do when the “big one” finally comes.

**Apologies for the lack of photos in this post. I plum forgot to take them for much of the session. And while I did take a video, I can’t seem to upload it.**