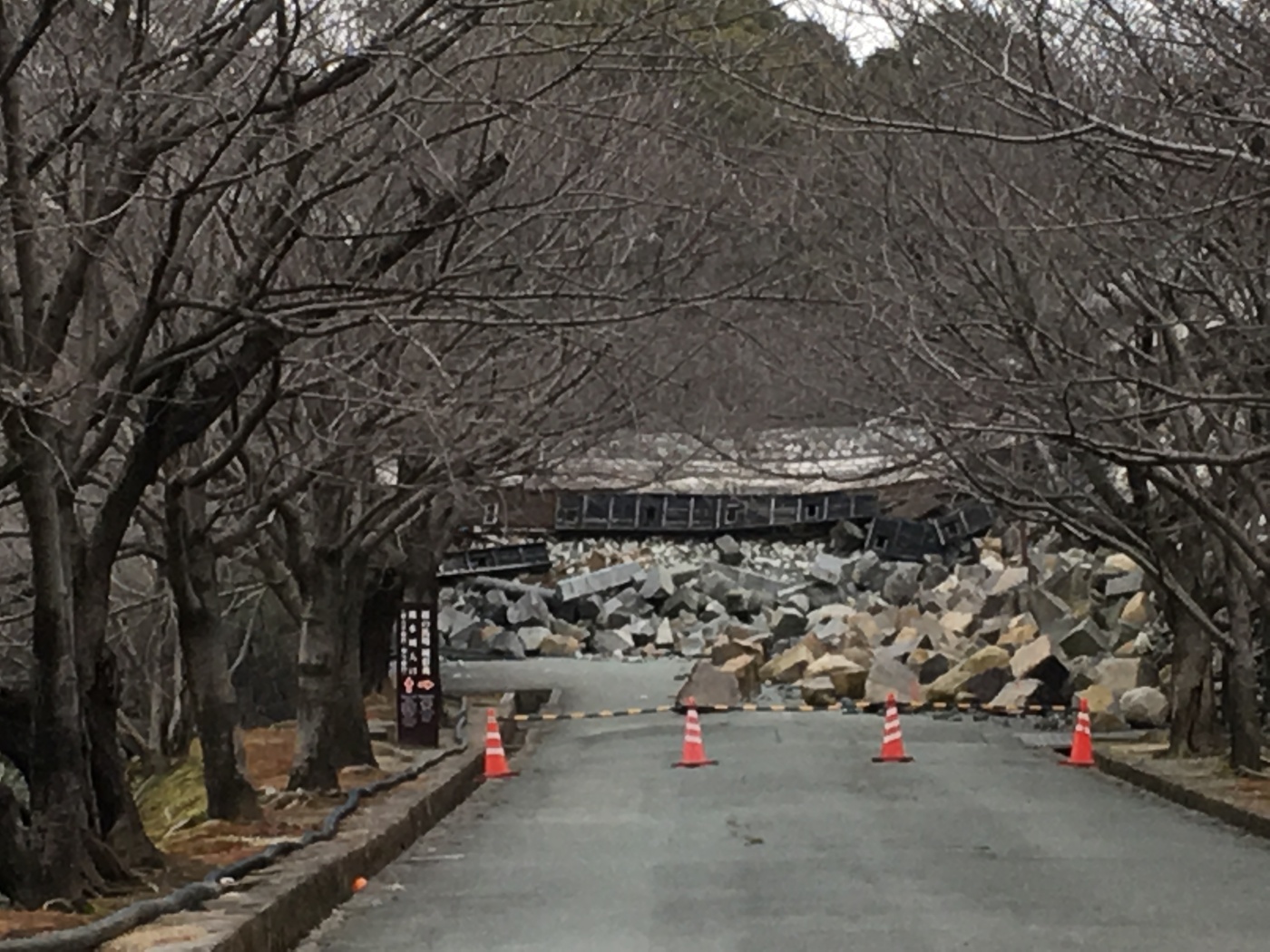 It’s been a busy spring with not much time for blogging, and for that I apologize. In late February, I had the chance to return to my “home” of Kumamoto, leading a small group of travelers on a tour to support the region.

This month marks one year since the sudden and devastating quakes in Kumamoto Prefecture. In that time, much has changed but the pace of recovery is glacial at times and it will be many years before things are back to “normal” – for some older residents who lost their homes, the chance to return may never come.

On our tour, we spent the first day in the Aso region. With the collapse of the Aso Ohashi (the Aso Bridge) in a massive landslide, the main road connecting Rt 57 and the southern part of Aso was rendered inaccessible. Winter is construction season in Kyushu and much of the area’s roads were closed off. It’s a situation that changes by the week, it seems, making it practically impossible to rely on GPS. The bridge is still gone, though there are plans to build a new one a few hundred meters to the south and talk of a tunnel has also been moving along. On a sad but positive note, the body of the student who had been on the bridge the night it was destroyed was finally recovered, thanks to months and months of searching by his own parents.

Aso Volcano has been behaving itself lately and more roads near the top of the crater are reopening after a closure of nearly two years. The region’s business are still mostly open and more than happy to welcome visitors. While exploring the backroads with your own set of wheels can be a bit frustrating with the continuing road repairs, visiting the main sites and towns is a great way to help contribute to the area’s economy. We were shown around by Explore Kumamoto and I can’t recommend Helen and her services enough.

Part of our second day was spent in Kumamoto City itself. More of the castle has been covered up since my visit in July, and work is moving along but it’s slow. A recent newspaper report mentioned that as the stones are sorted and catalogued (in the hopes of reusing as many original stones as possible in the reconstruction), only about 6 a day are identified (where they came from, where they can be re-placed). You can see rows of stones laid out in the old moat on the western side of the castle.

Starting in May, the castle tower will be covered up for several years. We managed to catch it uncovered and saw at least the cosmetic damage to the roof. Luckily, the roof tiles functioned exactly as they were designed to – they slid off the roof in the violent shaking of the quake, meaning that the heavy tiles didn’t puncture the roof itself and crash through the floors below.

More damaged were some of the yagura, or outer watchtowers. While a few had fully collapsed, one managed to balance on a single pillar of stones. It has since been reinforced, and as it’s right along the cherry blossom walkway by the outer wall, it’s easy to get a close-up look at the on-going work.

My personal explorations after our group adventure were more mixed. My old apartment looks like someone is living there, but my old neighborhood grocery store just one block away has been torn down. My daughter’s school has since closed, having sustained some damage and lost too many students in the subsequent months when they left for other facilities. My best friend’s house is fine – her parent’s house next door is now missing one of its outbuildings. It was torn down in the autumn as it couldn’t be repaired.

Returning “home” still feels different, yet the welcome is the same. My friends are all well. Yes, they struggle to recover from the emotional trauma of the event but for the most part, their lives continue. When we get together, we pick up where we left off and it feels like I’ve only been gone a short time. Kumamoto is strong, and welcoming, and beautiful, and determined and I hope that I managed to convey even a small sense of that to the travelers who accompanied me.