How I wish there was an onsen or sento right down the street, like in Japan!

Hopefully, I get these events up in time for anyone in Japan to make plans. October is one of the best months to be in Japan, provided typhoon season lets up a bit. Crisp nights, cooler days, and the start of the autumn leaves. Look for mushrooms, chestnuts and persimmons on menus … yum!

I’ve never actually been to the Sawara Autumn Festival, but I’ve been to Sawara. Several times.

It’s lovely to simply stroll the canal district but if you manage to make it for the Sawara Autumn Festival, you’ll be treated to 14 intricate floats (the summer festival has 10) being pulled along the canal’s western bank (in summer, they use the eastern bank). Dancing, traditional music and food accompany the three day event.

The festival generally runs from 10am until late in the evening. Check train times before staying too late!

I spent a lot of time exploring the precincts of Ikegami Honmon-ji this past year for part of a project I did for Ota-ku. The temple is like Senso-ji, without the crowds, but it gears up in a big way for the annual October festival which commemorates the death of the temple’s founder, wandering monk Nichiren, in 1282. The best event is the evening parade on October 12th, when large floats adorned with lanterns are paraded from the train station (Ikegami on the Tokyu Ikegami Line) to the temple complex.

If you want an insider’s perspective, don’t hesitate to contact the Ota Volunteer Tour Guides. Super knowledgable, super friendly, they’ll give you the scoop on all the ins and outs of the festival.

October begins the season for susuki, the silvery fields of pampas grass that carpet the highlands of places like Hakone and the Mt Aso region. I love driving through the Aso area in October and November, and seeing the plains simply covered in this delicate plant. It was often used in times past to thatch roofs and feed cattle. If you celebrated Tsukimi last month, you may have also used pampas grass in your ikebana arrangement.

It seems like there is always a festival going on at Asakusa but I am partial to the Kinryu-no-mai. Allegedly, when the temple was founded back in the AD 600s, a dragon came down from the sky to mark its dedication, and with its flaming breath created a forest of 1000 trees. The festival itself only dates to 1958, when the main hall was rebuilt following the war, but it’s become an important part of the local festival scene. The dragon processes up and down the Nakamise-dori shopping street and stops to do its main demonstration to the left of the main hall (near the pagoda). You can get really cool distant views from the observation deck of the Asakusa Visitor Center if you can’t get a seat up close. 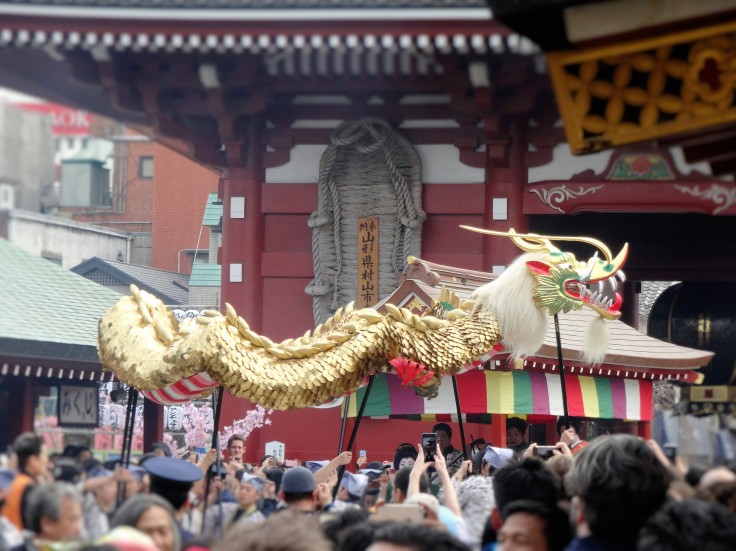 2 thoughts on “What’s On in October”