We’re in June now, and that means summer is around the corner. We have a bit of a reprieve at the moment with the advent of rainy season this week (the humidity is luckily taking a backseat at the moment), but come July, the heat will be on … and pretty unbearable, in my opinion!

But I have come to appreciate summer in Japan for the festivals. Last summer, unsure if it would be the final time I spent an August in Japan (at least for a while), I made it my mission to hit the major festivals of the Tohoku region. Over the course of a week, we took in the Aomori Nebuta Festival, the Hirosaki Neputa Festival and the Akita Kanto Matsuri. And hands down, the last one was my favorite.

The name seems a bit misleading at first. Isn’t Kanto what we call the area around Tokyo? Why is it held in Akita then? It turns out that in this case, kanto means “long bamboo pole”, exactly what is used to hold up a series of 46 lanterns (in ten rows).

Participants can hold or balance a kanto in four different ways. There is the hand hold: 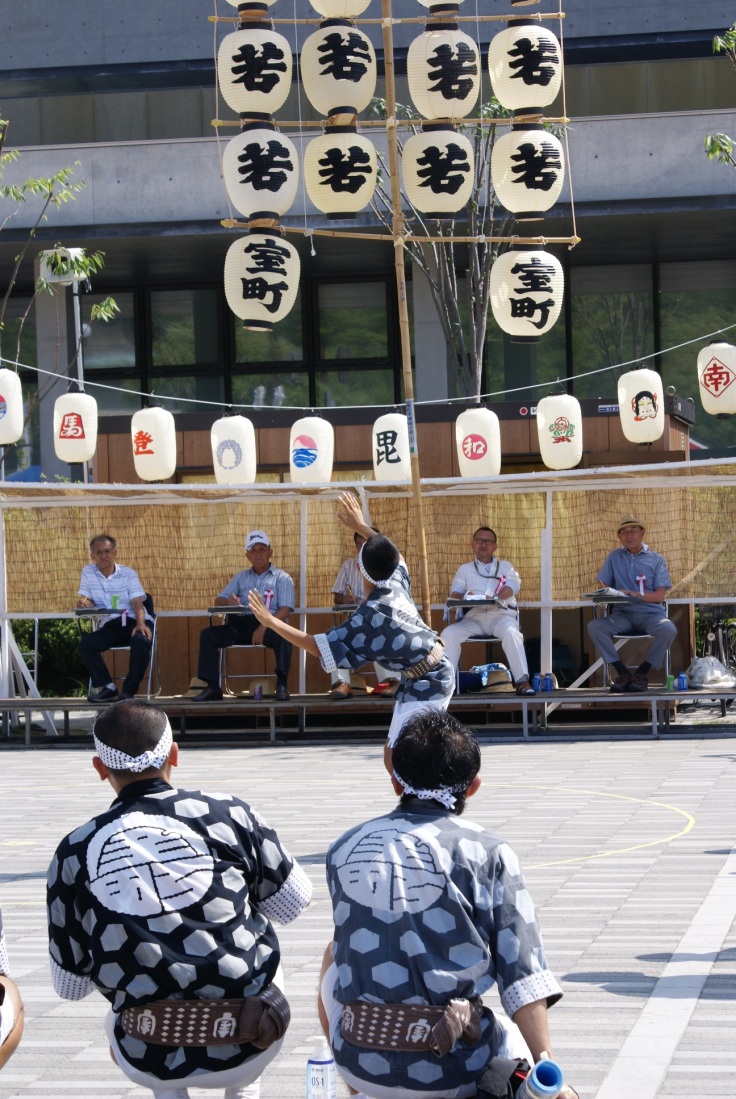 And the shoulder balance (not pictured, sorry!).

Keep in mind that these kanto can weigh from 30-50 kilograms. That can be up to 110lbs resting on your forehead! Ouch!

During the festival, which is held every summer from August 3-6, teams demonstrate their skills in a central plaza during the daytime. This is an excellent opportunity to come watch the competitors perfect their techniques and get some practice in before the night “parade”. Teams are rated on their level of skills (i.e. how well they execute the various holds).

In the evening, the excitement moves a few blocks over to the parade route. The route is bisected into various sections and about eight to ten teams are allotted to each section of the route at a time. On the signal, the teams raise their kanto and try to maneuver within the enclosed space without running into any of the other teams. They keep adding additional segments to the bottom of the kanto, making the poles longer and longer and increasingly top-heavy.

Frequently, some of the kanto get caught up in each other and it’s exhilarating to watch the teams duck and weave and attempt to disentangle their lanterns. Occasionally, a kanto spills over into the crowd and hammers the watchers below. Most parts of the parade route have guide wires in place to catch the falling kanto, but not the ends of the avenues (where we sat). All visitors are warned of this happening by event staff as they find their seats before the event (we were). We didn’t expect it to happen but right before we left, a very tall kanto crashed down on the people sitting immediately to our left! Luckily, no one was hurt.

Despite the fact that we had to bow out a bit early to make the long drive back to our campsite that night, this was absolutely my favorite festival in the lineup of Tohoku summer celebrations. Book NOW if you want to have even a chance to staying in town (it may already be too late) or consider taking the shinkansen in and out of Akita just for the festival.