Japan is known for its love of rankings. Top 10, Top 50 and Top 100 lists abound but some of the oldest rankings related to this country are the Top 3 designations. The Top 3 night views, the Top 3 waterfalls, the Top 3 Castles … that’s just a start.

I’ve always been a garden lover, so the Three Famous Gardens of Japan have long been on my to-do list. It took eight years, but I finally ticked the last one off just a few weeks ago, when I went to Mito to catch the plum blossoms in bloom.

So are these the best gardens Japan has to offer? In my humble opinion, no. There are many gardens in Japan, and a number of them are more impressive. None of these gardens below ever breaks the modern ranking of the top 50 gardens, as determined yearly by the Journal of Japanese Gardening. These ARE, however, some of the larger gardens in Japan and they all do have their attractive features. That said, now that I have visited them all, here is my own personal ranking.

Kenroku-en was a long time in the making. It was constructed over the course of 200 years – from the 1620s to the 1840s – by the Maeda clan in the seaside city of Kanazawa.

I’m not really sure what “coolness” means in terms of garden design. All I know is that I loved Kenroku-en. I visited in one of its best seasons, when the foliage was nearly at its peak. A short autumn rain dampened my visit to the main Kasumi pond area of the garden but I fell in love with the forested mountain in the garden’s far northeastern corner. That and the hidden garden located within the Shiguri-tei teahouse.

Kairaku-en isn’t nearly as old as Kenroku-en – it was only built in the year 1841. Kairaku-en means ” a garden to enjoy with people”. I certainly took that to heart – I visited this garden with two other friends, while all of my other garden visits were solo. Of the three famous gardens in Japan, this was the only one open to the public and is free to explore, save for the Kobuntei (villa/teahouse) which costs 190.

Kairaku-en was the last of the gardens I visited, and I purposely left it until I could schedule my visit for mid-winter. That is when Kairaku-en bursts into bloom with its 3000 plum trees (covering 100 varieties). There is a large grove practically next door to the parking lot and another large grove at the top of the garden. Other garden highlights include the bamboo forest and the views from the second floor of the Kobuntei teahouse. Still, I’m not sure if visiting this garden outside of plum season would have made such a favorable impression. 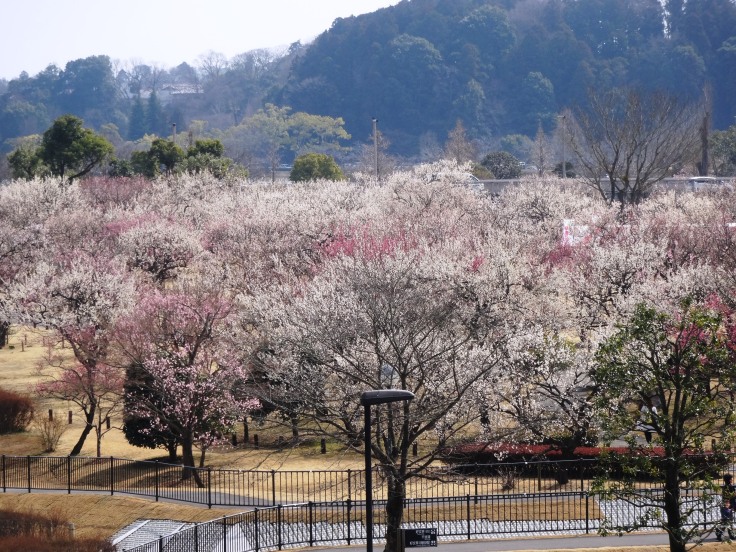 Koraku-en was built in 1700 by the lord of Okayama, the city in Hyogo Prefecture where the garden is located. The garden was built on the principle  “grieve earlier than others, enjoy later than others”. The garden actually opened to the public in 1884, but it was damaged severely during the 1945 air raids. The city restored it based on drawings from the Edo Period.

Koraku-en feels like a large paint palette – one large space with various dollops of paint (or different blooms, in this case). An iris garden with a wooden bridge stands next to the wisteria trellis. In a nearby section, a plum grove borders an orchard of cherry trees. All of these colorful sections border a large green lawn, an unusual feature in a Japanese garden.

I’m not a lawn girl (I grew up in the woods, after all) so this rather unexpected feature was a bit lost on me. It just made for a rather large impediment in the middle of the garden, as you couldn’t walk or sit on the grass. To be fair, I visited in the heat of summer, which is not always the best time to enjoy anything. But with little in bloom, this was the least impressive of the three gardens to me. 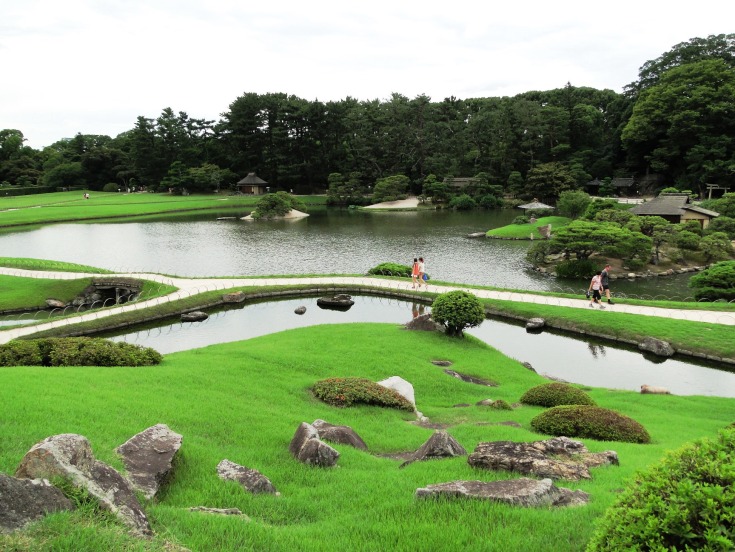 Have you visited any of Japan’s three famous gardens? Have you seen them all?What did you think?