Unless something drastic happens, this will be the last Photo Friday post I make from my home here in Kyushu. The movers come in just over a week and we begin the drive to our new digs in Tokyo in mid-July. How did three years go by so fast???

So in honor of my last month here, I figured this month’s photo should be something from Kyushu. (Not that we’ve ventured terribly far this month, but there was that trip to Okinawa to consider drawing from.) I actually took this photo yesterday at the Arao rice planting festival: 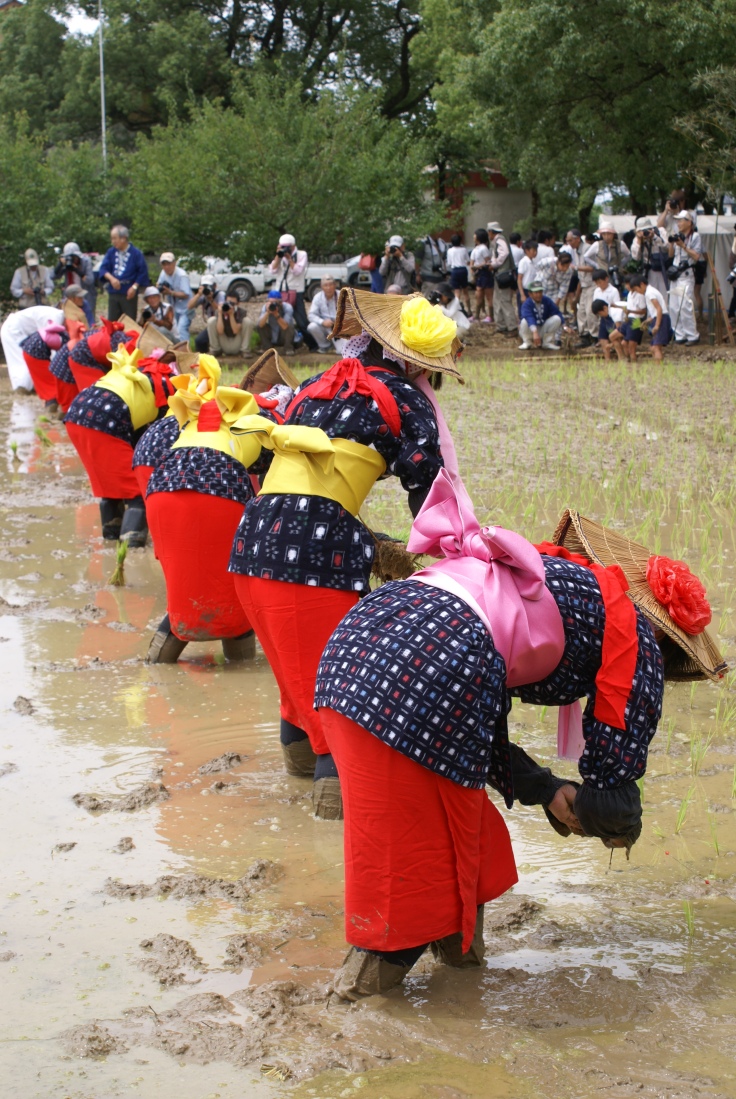 Arao is a small town north of Kumamoto City (near the town of Tamana) and the rice planting at Arao’s Hachiman Shrine was very much a local event. But that was part of the beauty of it. Mouths definitely dropped when a foreigner ambled into their midst but I was welcome warmly, even offered some pretty prime shooting spots from which to take pictures.

The crowd was split fairly evenly into three groups – professional photographers and local media (heck, even Kumamon was there to kick off the entire event); family members of the women participating in the actual planting; and the groups of local schoolkids who were marched out into the humidity for the occasion. The three and four year olds who took up a position just next to me might have been more eager to see Kumamon than the actual planting, but it is gratifying to see that the younger generation is at least made aware of this age-old cultural event. A group of elementary and middle school kids was even allowed to doff their shoes and join the official “planters” in the mud. (You can just see them in the back of the photo.)

Most of the rice fields around the shrine had already been planted earlier in the week and, judging from how perfectly aligned the rows were, I assumed a machine had been used. The field at the shrine looked quite haphazard by the time the priests gave the signal to stop, but I doubt that was ever the point. It’s more about the preservation and passing on of traditions, however antiquated they seem in this increasingly modern age.