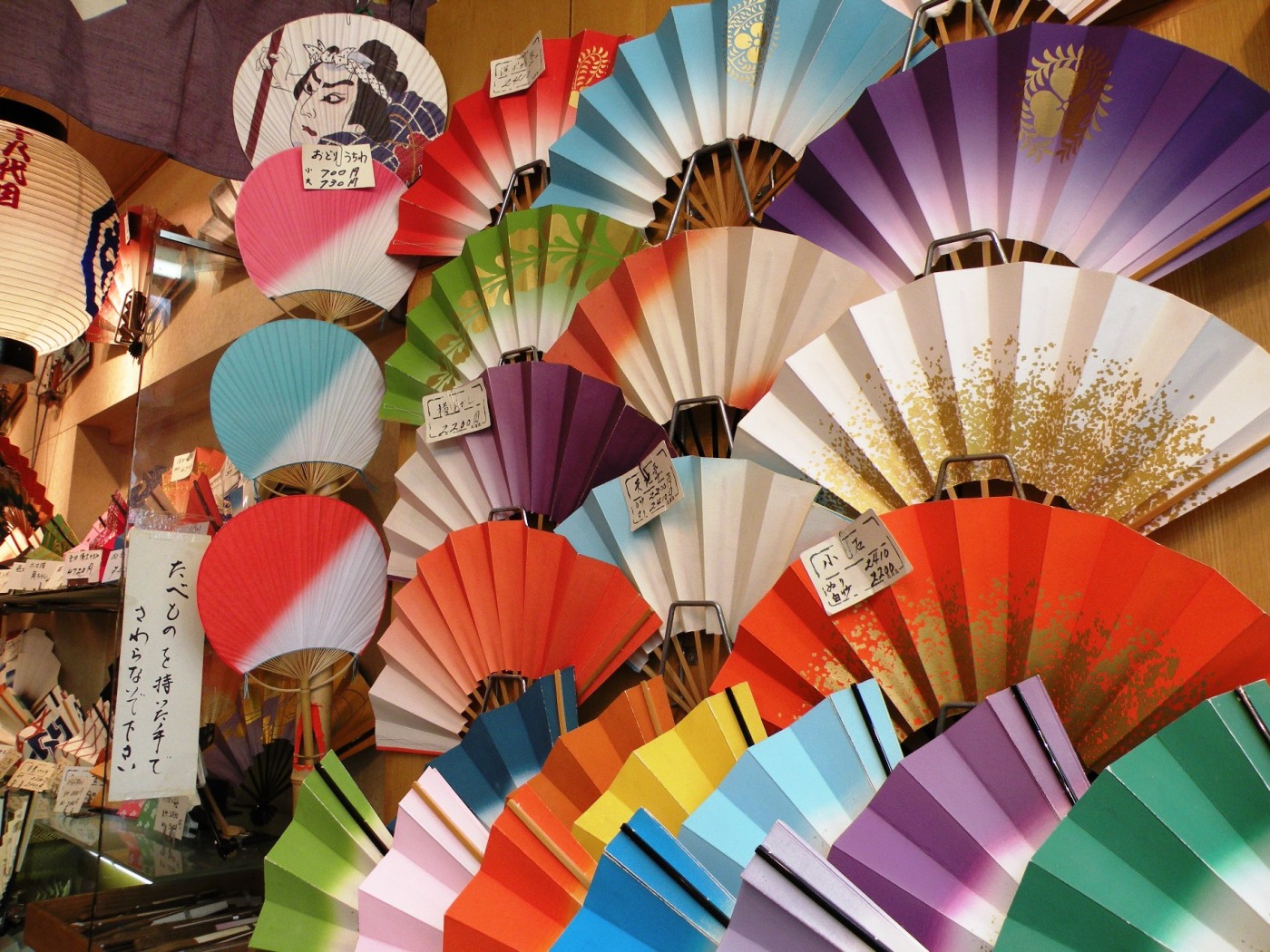 It’s June 1st and the heat is on (yes, now YOU also have cheesy 1980s song lyrics stuck in your head). Luckily, we haven’t yet broken the 90 degree barrier here in Kumamoto, although poor Kyoto has been stewing all week. Rainy season seems set to arrive tomorrow, though, so we’ll hopefully see a few weeks of cool(er) weather before the summer temperatures really shoot up.

Thinking of summer makes me think of ways to keep cool (the main preoccupation of anyway who spends the summer in Japan, I assure you) and that leads me to fans. I wrote about my experience playing a traditional fan game in Kyoto the other month but here’s a bit more detail on the role of fans in Japanese culture.

There are three general types of fans:

These folding fans are most likely the image you have of Japanese fans. Sensu date from the Heian Period (794-1185) and were constructed out of bamboo and washi paper, components that haven’t changed much in the past millenium. The typical women’s fan ranges in size from 18-20 centimeters, while men’s fans are 23-24 centimeters.

Sensu were once used by court officials as a stand-in for notebooks. With paper being so scarce in Japan at the time, court officials wrote on strips of wood and then stitched them together with silk strings and folded them up to store in their robes.

Sensu have several different variations, even today. One long-lasting version is the chasen. This smaller version of a typical sensu is used in the tea ceremony. It is never actually opened but is placed in front of the host or tea master when they are welcoming guests to the ceremony. Afterwards, it is tucked back into the host’s kimono. Folding fans are also used on stage by kabuki performers and for certain traditional dances.

Unlike sensu, these fans don’t fold. Uchiwa are constructed from bamboo strips that join together to make a circular frame, over which silk of washi paper is stretched. While you can find intricate and detailed uchiwa in fan shops, you’ll most often stumble across this type of fan outside of subway or train stations in major cities, where you will be offered a cheap one with an advertisement on it. In Kyoto, however, keep your eyes peeled for uchiwa emblazoned with the name of a maiko (apprentice geisha). Maiko present these to shops and restaurants they frequent, a very visual form of customer appreciation.

You can divide war fans into several subcategories themselves but for the most part, all varieties were made from wood and metal. Gunbai, or gumpai, are the largest type, used by officers in battle to signal directions to their troops (and they also doubled as sun shades … no, really). The smaller tessen were actually used as weapons themselves. Tessen were constructed out of metal to resemble sensu, and could be carried covertly into a battle or a meeting/encounter where weapons were not technically permitted. Some types of tessen actually opened just like a folding fan, only the outermost layers were formed from metal and could be used to deflect darts or be thrown at someone with the intent to slice limbs. You can see war fans nowadays are certain castle museums around Japan.

Fans make great souvenirs as they can be easily packed and transported home. You’ll find them in a variety of prices, depending on the quality and age. And keep your eyes peeled for those advertisement fans outside of metros. They can come in quite handy in these hot summer months!