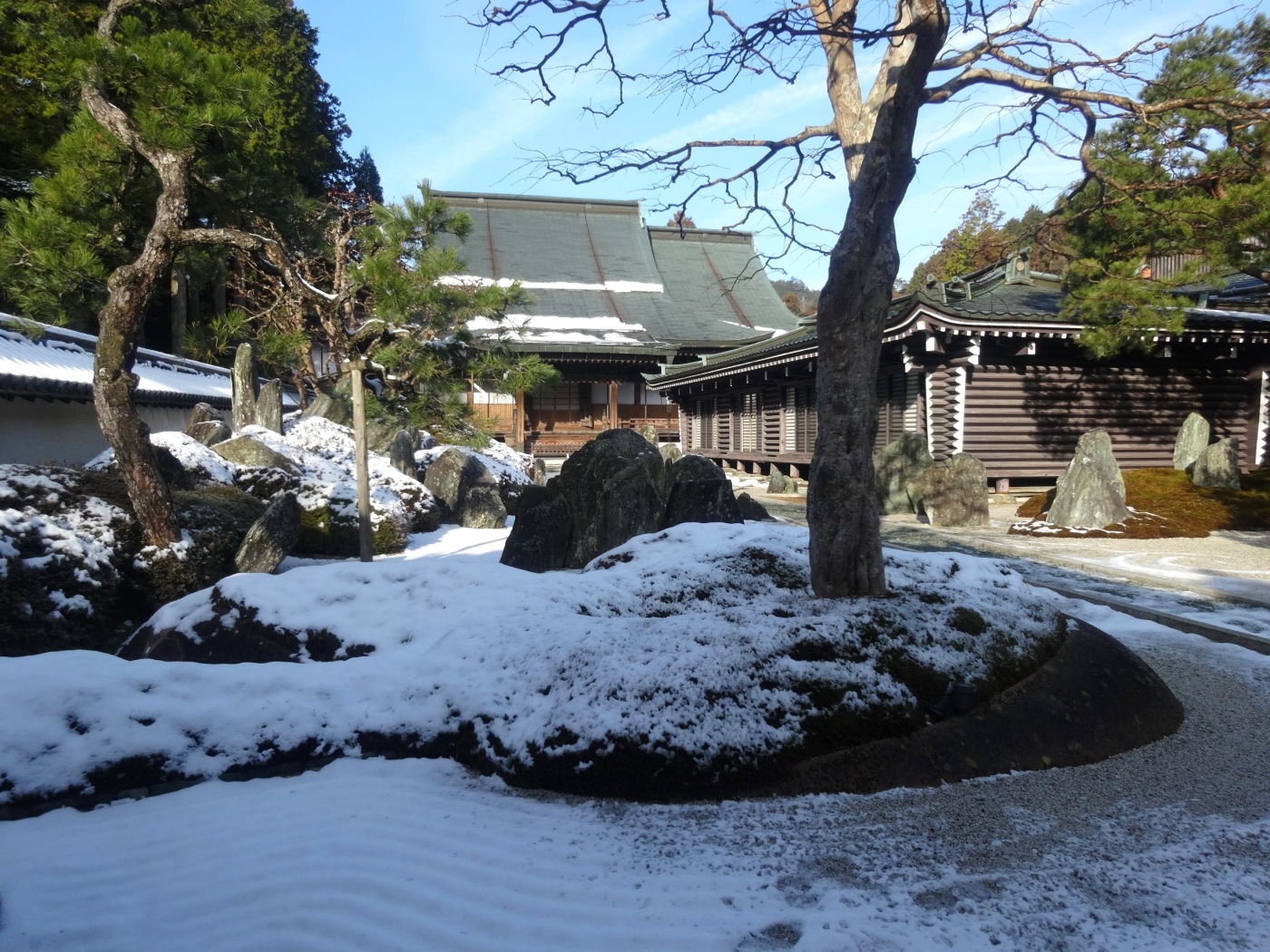 One of the attractions of visiting the religious complex of Koyasan in Wakayama Prefecture is the chance to stay in a shukubo, a temple lodging. Guests are treated to Buddhist vegetarian cuisine and can participate in morning prayer services. But not all shukubo are created equal. Here is my personal experience from January 2015.

Winter was the main motivating factor in my choice of shukubo. My friend and traveling companion Felicity – who has been to Koyasan numerous times – suggested Fukuchi-in as our lodging of choice, mainly based on the fact that it was the only shukubo to boast an on-site onsen (and a rotemburo to boot!).

Fukuchi-in is located in the center of the temple complex, but a five-minute walk from the main road that seems to be the location of most of the area’s shukubo. A beautiful rock garden lies in front of the building; its smaller counterpart can be seen from many of the rooms. The front part of the temple is a maze of rooms with beautifully painted screens, the prayer hall and some larger public spaces. The onsen lies to the far western edge of the building.

Our room was a decent size and very well-heated, though the toilets were down a VERY chilly corridor and for some reason, we were never given pillows for our beds. We had a large group of very noisy neighbors next door but they only seemed to eat in that room – thankfully, our sleep was uninterrupted.

The food was served in our room on a series of small trays. It was brought in waves and some dishes had notable absences. Felicity was missing the entire wakame (seaweed) tie from one of our tofu offerings and my tempura was delivered without the dipping sauce, which was brought around a few minutes later. The young server who did speak very good English didn’t seem inclined to want to chat in the least, though his Japanese-speaking counterpart (who giggled every time we spoke in his native tongue) was keen to linger and answer our questions.

The food itself was very good, despite being heavily tofu based and lacking much in the way of flavoring. Note that this is not a criticism, but simply the way that shojin ryori (temple cuisine) is prepared – no meat, no fish, no salt, no strong flavors. There were many different offerings and we had unlimited rice and tea so we certainly didn’t starve.

Our alarm was set for 6am to catch the morning prayer service. I envisioned a large tatami mat hall where we would sit with the monks (or at least behind them) and maybe have the chance to offer up a few incantations. Instead, the monks were sequestered away in a screened area near their altar and we joined the many other pilgrims on the floor (though we did find some stools) outside that area. Many of the pilgrims were in full outdoor gear and fingered prayer beads while chanting their prayers. We showed up in our yukata (bath robes, essentially) as we planned to take a dip in the onsen after – needless to say, it felt like showing up to the opera in one’s underwear.

Breakfast was in the same vein as dinner and check-out was at 9am, a tad earlier than most ryokan and hotels. The temple was kind enough to hold our luggage after check-out (and before check-on as well).

So what did I think? Frankly, I was a little let down. The food was very good, but I have had excellent shojin ryori in Tokyo as well. The accommodations resembled a standard ryokan and the onsite onsen, though delightfully warm in the frigid weather, wasn’t enough to make the experience one of my most memorable. But perhaps the most disappointing aspect of our stay was the morning prayer. I am not sure what I expected but I think I was hoping for something slightly more participatory.

That being said, Koyasan is really best done as an overnight, so your time temple-hopping is not restricted. I am not in the least bit sorry that we stayed overnight but as someone who has stayed in many ryokan, I didn’t find the experience quite as novel as I had thought I might. I suppose it also depends on your choice of shubuko – there are over 50 to choose from in Koyasan so my experience may be greatly different from your own.

Have you been to Koyasan and stayed in a shukubo? I’d love to hear about it! Share your thoughts with me in the comments!