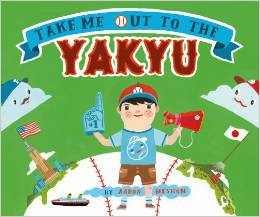 This review is a month too late for baseball season, but I can’t wait until next year to share this cute kids’ book. My daughter received this from my in-laws as a gift back in September and we have taken to reading it at least a few times a week.

Take Me Out to the Yakyu follows a young Japanese-American boy as he goes to the ballpark, both in America and in Japan. (Yakyu is the Japanese word for baseball.) The left side of the page deals with his experience in the US, while the right side of the page s

hows his experience in Japan. The book covers topics such as the different modes of transportation used to get to the stadium, the different cheers sung by team supporters and the various foods available to the fans of both countries.

On a few pages, both Japanese and English words are illustrated (ie the word for “pitcher” and “home run”) and the end of the book holds a full glossary of baseball terms in both languages. There is also a short, kid-friendly history of baseball in both America and Japan in the appendix. The author (who lived in Japan for a time) also touches on things like mascots, stadiums and game length in the two countries.

The book is a fantastic cross-cultural reference for kids but it really shines in the details. The illustrations hold little details like futons in the Japanese bedroom and torii gates and Mt Fuji in the countryside as the main character rides to the stadium. Even kids who aren’t sports fans will be charmed by this story. Great for ages 3-10.

4 thoughts on “Review: Take Me Out to the Yakyu”