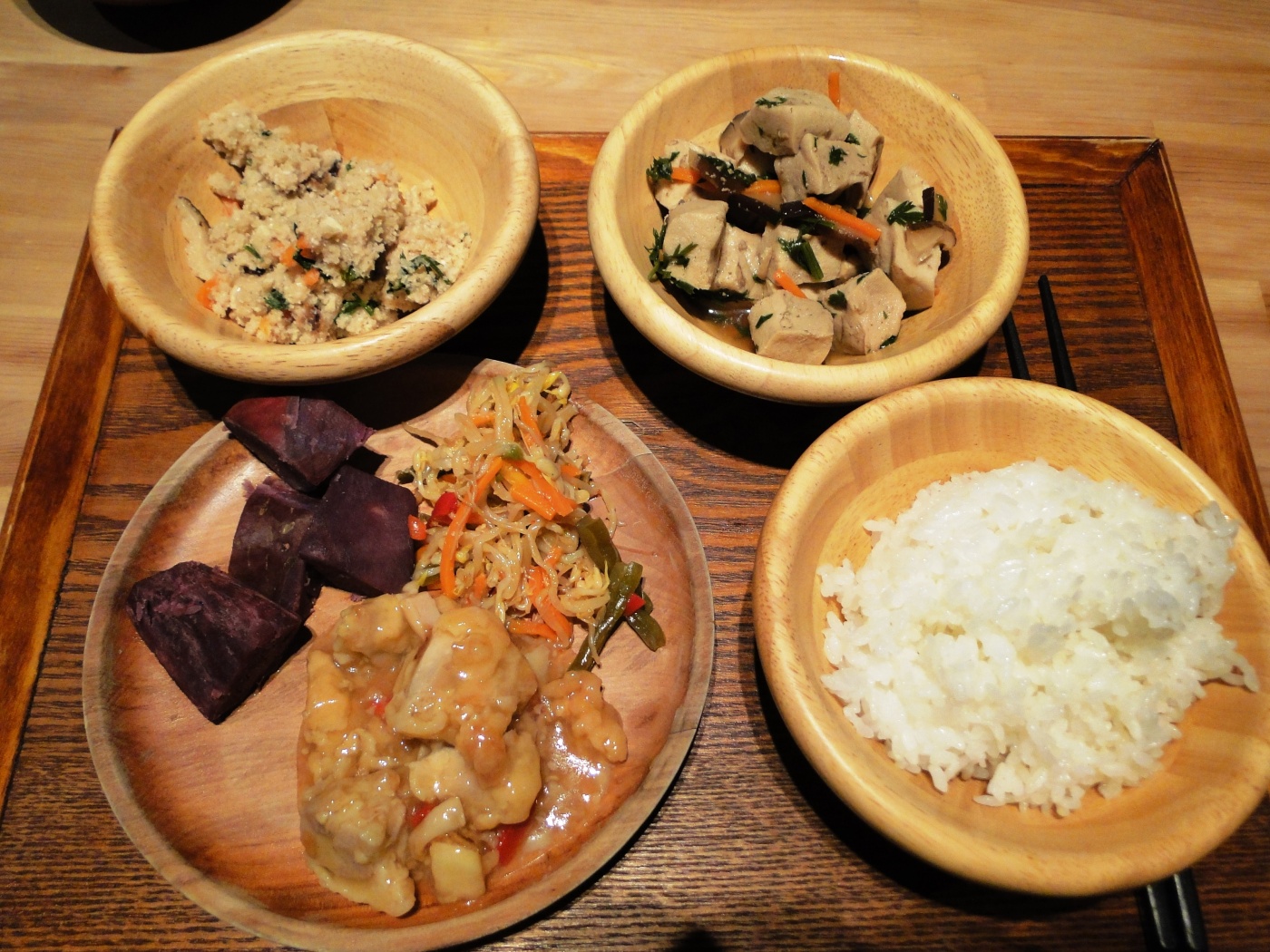 When I was in Kyoto last year, I was wandering the blocks around the main artery of Shijo-dori, looking for a washi paper store. I found it, a few blocks south of Shijo on Higashinotoin-dori. On the way, however, I passed a squat black building with a significant line of people waiting outside the door. A quick glance inside showed me what they were all eagerly awaiting – a buffet of local, organic vegetables. Though I had a plane to catch that afternoon, I immediately made plans to return.

And I did, on my family’s fall vacation last November. After a day of frigid hiking up Daimonji, we headed downtown for something both warm and filling. We managed to luck into the last few seats at Kamo (known on their website sometimes as Nasu Kamo). In fact, a line formed within minutes of our arrival. We were led upstairs to a table for four and then instructed on the rules of the buffet. Food was limitless, though you had an 80 minute time limit, and you could help yourself to all the water and tea you wanted but other drinks were on a paid basis. (Apparently, you can get unlimited soft drinks for ¥300 extra and “unlimited” alcohol for ¥950 extra).

The buffet table consists mostly of vegetables, all purportedly grown organically and sourced from Kyoto area farmers only. They appear here in various forms, from simple salads (like hijiki and kinpira) to straight up vegetables with little garnish. There are a few dishes that contain traces of meat and there is usually a curry option. Rice is self-serve from a large rice cooker and there is always a warming vat of miso soup. The vegetables obviously change according to the season (a colorful mural on the restaurant’s upstairs wall shows what’s growing in the area when) but here is a small selection of what was on offer on the day we dined.

Kamo is open for breakfast, lunch and dinner, though I am not sure how breakfast would differ from the other meals. Breakfast hours are 7h00 to 10h00, lunch is served from 11h00 to 16h00 and the dinner buffet runs from 17h00-23h00. You must enter the restaurant at least an hour before they close for that meal (ie by 15h00 for lunchtime). Their website is all in Japanese but for an idea of the menu, you can find pictures of the daily dishes on offer (use google translate if you need some help).