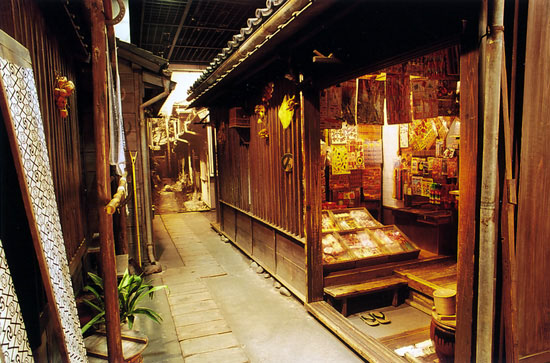 Whew, did I mention “perfect” weather in the blog last week? I write my Friday Photo post early in the week when that was still the case. Come Wednesday, though, the heat ramped up and we were treated to near 90 degree temps (that’s 30 degrees Celsius for you sensible metric scale users out there). If this is a precursor to summer this year, I am outta here!

I head up to Tokyo again in just under two weeks for my favorite time of year – iris and hydrangea season – but the site below was one I visited when I first moved to the city, nearly 6 years ago.

Ueno Park might as well be known as Tokyo’s defacto museum quarter. For history buffs, there’s the National Museum of Tokyo. Art lovers will want to check out the National Museum of Western Art. And the science buffs out there might find the exhibits at the Natural History Museum to be worth a peek. But if you’ve got kids along and you just can’t take any more trips to the zoo, the Shitamachi Museum near Ueno’s Shinobazu Pond might be just the thing.

Shitamachi means “downtown”, nowadays referring to the old neighborhoods of Tokyo that existed in low-lying floodplains, namely along the northern and eastern sides of the city. These were the pre-war neighborhoods of covered shopping arcades and convoluted alleys and traffic patterns, where everybody knew everybody else and mom-and-pop shops were the name of the game. The Shitamachi Museum in Ueno Park tries valiantly to recreate some of that era on their first floor, with a mock-up of an old neighborhood block, complete with candy store and coppersmith’s workshop. Visitors are free to poke in the tenement buildings and rifle through the shop’s possessions, allowing for a tactile romp through history.

There is English information for each of the shops recreated here but the museum often has a handful of English-speaking docents – some of whom are old enough to remember when their neighborhood looked like this – who can help guide you through each exhibit. Foreign guests might not get the same feelings of nostalgia out of some of the objects (“Hey! There’s the wooden block Grandma used as a pillow so she didn’t mess up her hairdo!”) as Japanese visitors, but it’s highly interesting to hear the explanations of some of the objects.

Upstairs, a number of documents (mostly Japanese descriptions only) are on display but the best part for kids is the table of old-time toys. Young and old alike can try their hand at tops, ball catch and various paper crafts.

The museum sits just at the edge of the Shinobazu Pond, below the rest of the museum’s of Ueno. Entrance is only ¥300 for adults and ¥100 for high school students and below.