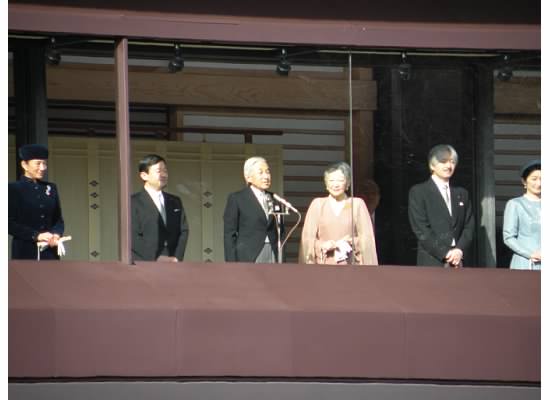 The Japanese may not really celebrate Christmas (beyond eating lots of Kentucky Fried Chicken!) yet they do have an official day off this week, thanks to the timely birthday of their current emperor, Akihito.

December 23rd is Akihito’s birthday and became an official holiday called Tenno-tanjobi not long after Akihito took over the throne following the death of his father, Hirohito. Before that, the Emperor’s birthday was celebrated as an official holiday on April 29th, the day Hirohito was born. Following his death, instead of doing away with the holiday (that would shorten Golden Week, after all), it was renamed Showa Day (Hirohito’s reign was known as the Showa Era, and he himself was called Emperor Showa).

Both this day and January 2nd are actually one of the only times of year that average citizens can actually catch a glimpse of the respected leader. On both dates, the Imperial Palace in Tokyo is actually opened to the public and the Emperor appears on the balcony of what I believe was his residence (if not, just one of the other palace buildings) to address the crowd. Paper Japanese flags are given out, cheers of banzai* fill the air, and the Emperor, Empress Michiko and various members of the Imperial family give a few waves to the crowd before it’s time to he herded out. It’s a rather short-lived celebration but a very unique chance to get inside the Imperial Palace if you’re in Tokyo those days.

As the current Emperor’s health is in a rather precarious state lately, it is entirely possible that we could see another Emperor’s Birthday appear on the calendar in the next few years. If so, it will be interesting to see what happens to December 23rd, whether it remains an official day off or not.

*Note: Don’t confuse banzai (which essentially means “hurrah”) with bonsai (盆栽), the art of shaping plants.  It wouldn’t make much sense to yell “perfectly-pruned trees!” at the Emperor but then again, he might not mind. 🙂

I won’t be posting on Wednesday this week like usual as I hope to be stuffing my face with my mother’s homemade shoo fly pie and teaching my daughter about American Christmas traditions. I wish you all a safe and happy holidays!