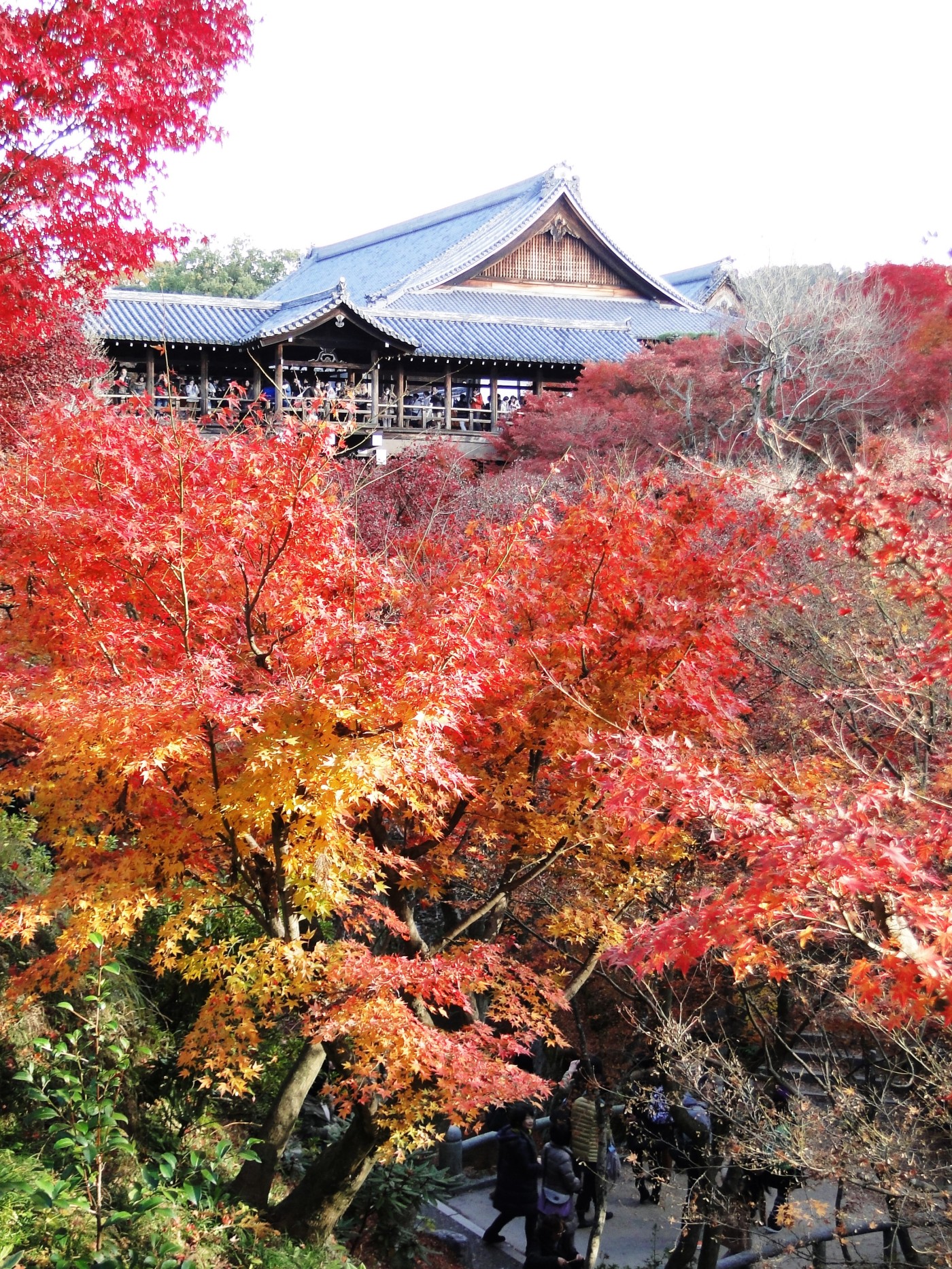 Whew! What a busy week and a half it has been. For those of you who follow me on Facebook (simply search Uncover Japan), you’ll know that I’ve spent the last ten days exploring central Japan. I got to revisit Takayama, one of my favorite small towns in Japan, and ventured to Shirakawa-go and Kanazawa – the latter up on the Sea of Japan coast – for the first time. Both were beautiful and you’ll see more posts about them soon, I promise! I ended my travels by meeting up with my husband and daughter for a Thanksgiving getaway in Kyoto, where we rented a house for five nights and attempted to soak up as much of the fall foliage experience as possible.

There is nothing quite like koyo (autumn leaf “peeping”, as we’d say back home) in Kyoto, arguably Japan’s most attractive city. Whole books and magazines are dedicated to the pursuit of finding the perfect leaves. I know because we bought one ourselves, a sizable heavy-duty, Japanese-language magazine guide produced by JTB (Japan Tourist Board). It turned out to be a very good reference, though the tourist offices in Kyoto are well-equipped to handle any inquiries regarding the top foliage destinations and even keep an updated info board (shrine and temple names written in kanji only, unfortunately) showing the progression of the leaves.

And for once, those pictures in the books were proven true. The maple leaves really were the reddest of reds, the gardens really were undeniably stunning, even the trees lining the sidewalks were turning splendid shades of gold.

However, koyo season comes at a price – packed buses, insanely crowded temples and shrines, long lines at popular restaurants and higher admission rates at certain sights. Now that I’ve “been there and done that”, here’s what I’ve learned from spending time in Kyoto on its most popular weekend of the year.

1. Reserve, reserve, reserve – When you know your travel dates, immediately book your hotel. Don’t wait until the last minute to try to score a place in Kyoto on the last few days of November. If hotels and ryokans have filled up, consider renting a house through an official organization (Japan Experience, Iori Kyoto Machiya Stays) or through airbnb or vrbo. About two weeks to one month out (or even earlier, depending on the place), make any restaurant reservations you want. I popped into three cafes/restaurants that were on my “to-eat” list only to find out they were completely full or booked out for that day. If there is somewhere you want to try, don’t leave it to chance.

2. Be smart about bus travel – I arrived in Kyoto last Wednesday around 11am and already the lines for the buses to most locales on the eastern side of the city were about fifty people long. So many people got on at the station that the first few stops, no one else could board. If you’ve booked a ryokan near Kyoto Station, consider walking to the station to start your travel. You also might want to buy a bus pass purely for the convenience of it. Costing ¥500 and paying for itself by the third ride, all you have to do is slip it in the machine the first time you exit the bus and then flash it to the driver every time after. Otherwise, buses are ¥220 per ride and the change machines are only located at the front of the bus and only take ¥1000 bills or coins. If you don’t want to waste time or hold up the line when disembarking, a bus pass just makes the process that much smoother. Buy passes at the station, the tourist offices, convenience stores or even on the buses themselves (though drivers are sometimes out, be warned).

3. Go early – Nobody was at the Heian Shrine garden at 8:30am on a Sunday morning. EVERYBODY was at Tofuku-ji temple around 2pm in the afternoon. If you can get yourself up and out the door at a decently early hour, the payoff will be worth it.

4. Go late – Sorry, not trying to confuse you after what I stated above. What I mean by go late is that many temples and shrines do special illuminations during both the cherry blossom and the autumn foliage season. I know for a fact that Kiyomizu Temple had floodlights on their valley of maple trees from 6:30pm-9:30pm every night for about three to four weeks in late November/early December. It’s a great opportunity to see the temples themselves in a different perspective and the mix of light and leaf colors can be quite stunning.

5. Just go – Despite the hassles, this was an incredible time to be in Kyoto. If you can mentally prepare yourself for some of the challenges – things will take longer, sights will be very crowded – you won’t be shocked and jaded by the reality of the experience. We mixed things up during our five days with famous foliage sights on some days and out-of-the-way destinations (like mountain hikes) on others. It worked well and gave us some time to decompress from the chaos of the popular locales. The leaves truly were magnificent and I don’t regret our decision for an instant.

15 thoughts on “Experience: Koyo in Kyoto”