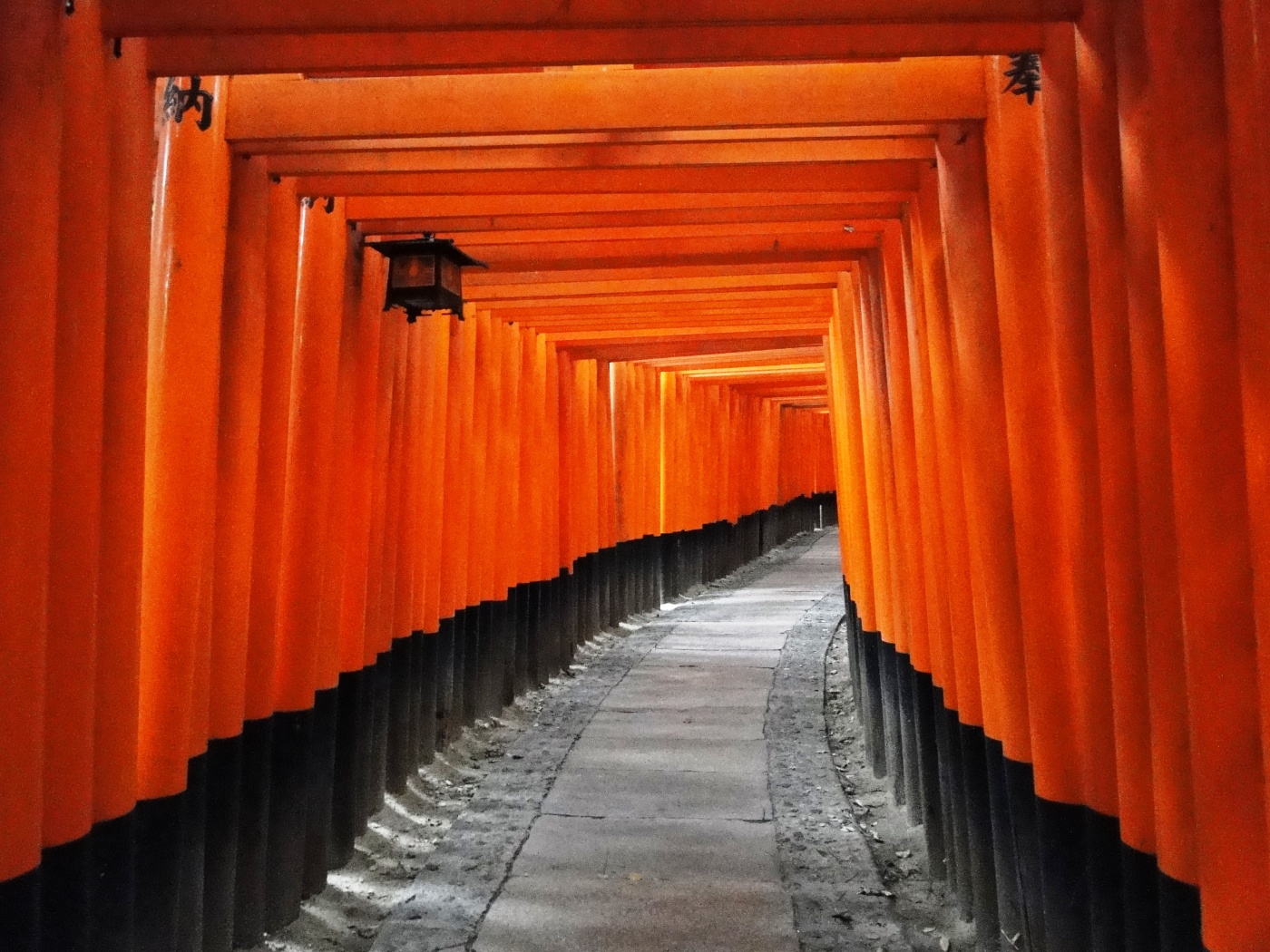 It’s one of those dark, rainy days here in Kyushu today that – if not for the lingering humidity (c’mon already!) – I would think we had passed straight into winter. I’ve been eagerly awaiting the arrival of fall in Kumamoto, but it seems we might still be a few weeks away yet. The Japanese meteorological service is now predicting a late change of the local leaves and a hard winter.  Just in case autumn bypasses Kyushu entirely, my family and I decided to spend (American) Thanksgiving in Kyoto this year. I’m hoping that those few days will be enough of a leaf-peeping “fix”!

Apologies to my former hometown of Tokyo, but Kyoto is fast becoming my favorite city in Japan. Yes, it’s modern and has its share of unappealing architecture, but large swathes of the city still strive to retain a feel of the old capital (like the Higashiyama district). You’re also never far from the mountains; in fact, Kyoto is ringed on three sides by low peaks. The Fushimi Inari shrine in southern Kyoto gives you a bit of both – a gorgeous (and extremely photogenic) shrine and the chance to hike into the surrounding hills.

Fushimi Inari’s origins date back to 711 AD, when the goddess Inari – deity of good harvests and abundant food – was enshrined on the mountain that now bears her name. The main hall of the shrine was moved to the base of the hill around the 800s, though no buildings remain from that time. The Honden (Main Hall) DOES date from 1499, making it a respectable 500+ years old, and a tea house on the grounds dates from the 1600s.

As the name states, this shrine is an Inari shrine, one of many around the country dedicated to the goddess (though some say god) of rice. Inari’s messengers take the form of foxes (kitsune), usually portrayed as stone guardians at the shrine’s entrance. Traditionally, one fox is male and the other female, echoing Inari’s dual identity. Worshippers often leave offerings of rice, sake or other food at the shrine, primarily for the foxes. The hope is that, by appeasing Inari’s messengers, the animals will subsequently intervene with the god or goddess on the petitioner’s behalf. If the word Inari sounds slightly familiar, you might have eaten inari zushi, pockets of slightly sweet tofu skin stuffed with rice and often served at sushi counters or in bento boxes.

Most people come to catch a glimpse of the hundreds of vermillion torii gates that stretch up the hill for 4 kilometers. Each gate bears the name of its donor on the back side; individual gates can run from US$4000 to upwards of US$10,000. Your welcome to climb through the trail of torii to the top of the mountain, a hike which averages about 2-3 hours. There is no view from the top, however, though a sweeping panorama of the city is seen from further down the train at the Yotsutsuji intersection. The torii gates get a little faded and unkempt the higher you go; hands down, the best pictures are in the double tunnel at the beginning of the path. As a result, this section also sees the heaviest traffic.

Fushimi Inari might seem far away when you first glance at the map of Kyoto, but it’s only a 5 minute ride from Kyoto station (on the JR local line to Nara) and a 9 minute ride from central Gion (on the private Keihan railway). With no official opening hours to the shrine, you can pop down here in the early morning or save it for the end of your day, when other sites have closed.