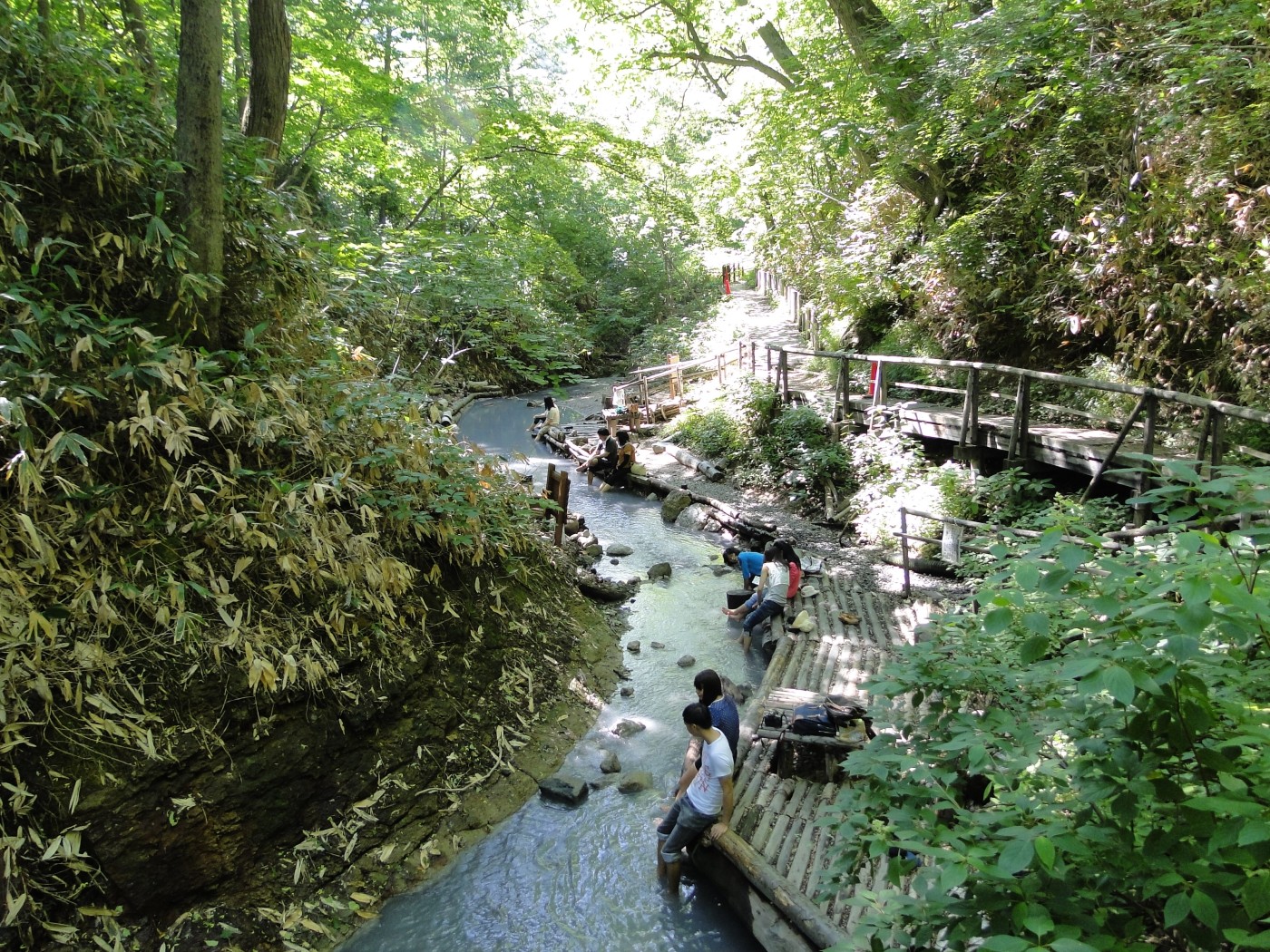 Noboribetsu Onsen is considered to be Hokkaido’s top onsen (hot spring) resort. After spending two nights there in mid-July, I have to agree that it’s pretty darn good. But the baths feel a bit commercialized – the complex of my ryokan alone had at least 13-15 baths per gender. So when I heard about a natural hot spring you could hike to in the woods, I knew I had to check it out.

Noboribetsu’s onsen get their water from nearby volcanic springs. At the edge of town, you can see some of this volcanic action at Jigokudani, the “hells”, where the earth belches sulfur-smelling gas on a regular basis. Most tour buses disgorge their passengers here for a quick stroll along the boardwalk. At the edge of the parking lot, however, more intrepid explorers can take the steep wooden steps up into the woods to pick up the Oyunuma trail.

The trail is short and well-marked, watched over by a parade of Jizo statues. Before branching off to the natural footbath, make sure to walk all the way to Oyunuma pond, a gourd-shaped body of water that fills an old explosion crater of Mt Hiyori. The glassy-surfaced pond may look idyllic but don’t even think of sticking a toe in there to check. The average temperature of the water fluctuates between 40-50 degrees Celsius (104-122 degrees Fahrenheit) and near the bottom, temperatures of 130 degrees Celsius (266 degrees Fahrenheit) have been recorded.

It’s this body of water that heats the Oyunuma Brook, a small bubbling stream that flows out of the lake and into the nearby woods. It’s a short jaunt down the shaded trail to a curve in the bend where a few wooden platforms hug the banks. The water here is a hot but bearable temperature and you can sit and dangle your legs in the therapeutic waters. Despite the large numbers of tourists in the town below, the footbath area was remarkably uncrowded and I enjoyed a good half hour soak of my limbs before packing up and heading back down the trail to civilization.

The tourist office in Noboribetsu Onsen has good English language maps of the hiking trails and the route is fairly well signposted in both Japanese and English.