In keeping with the musical theme of the last Crash Course, I decided to do a post on the shakuhachi, Japan’s traditional flute. This isn’t an instrument people stumble across too often on their journeys through Japan but recently, my husband actually started taking shakuhachi lessons. Perhaps his … shall we say … “considerable” attempts to even get a sound out of the thing prompted me to learn a little bit more about this instrument (before I beat him over the head with it, that is. At least he hasn’t taken up the taiko drum.)

The shakuhachi is an end-blown flute, meaning you play it while holding it like a clarinet. It’s a bit uncertain when the shakuhachi actually appeared in Japan, but most scholars agree it arrived from – surprise! – China, via the Korean Peninsula around the 6th or 7th century. When the flute first arrived on the Japanese archipelago, it had six holes – sometime after its arrival, however, the structure changed. Today’s shakuhachi boasts only five holes. 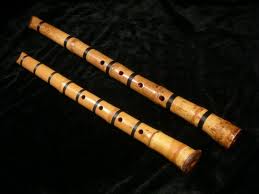 By the 16th century, the shakuhachi was synonymous with monks who practiced zazen (also known as suizen) meditation. The monks – most of whom were members of the Fuke sect – would practice regulating their breathing patterns through the playing of the shakuhachi. During the era of the Tokugawa Shogunate (1603-1868), agents of the attempted to infiltrate this increasingly secretive religious sect; soon, however, shakuhachi “tests” were designed to weed out imposters and those were couldn’t pass the tests were beaten or killed outright. When the Fuke sect of monks disbanded in 1871, the practice of shakuhachi was abandoned. It wasn’t until two decades later that the Myoan Society revived the shakuhachi tradition in Kyoto, at the old Fuke Temple of Myoan-ji.

Today, shakuhachi music is gaining prominence around the world. While the shakuhachi was played exclusively by men in the past, there’s been an increase in female shakuhachi masters in recent years. The shakuhachi is also becoming popular in contemporary music, and has been used in soundtracks for movies like Braveheart and Jurassic Park and by bands ranging from Peter Gabriel to Linkin Park.