Alright, that’s a bit of an exaggeration but as I comb through the stacks of photo files, I realize that I came to the manhole game a bit too late. All of those towns and cities that I visited when I lived in Tokyo … yeah, I often forgot to look down. In fact, I don’t think I even realized Japan had decorated covers until halfway through my year in the capital. Now, my list is growing again but most of the covers are Kyushu-based. So am I, to be perfectly frank, but I like to have a well-rounded selection. 🙂

Anyway, this week’s cover comes out of the archives from a trip I took to the Izu Peninsula. My husband and I were heading back home to Tokyo in our zippy little rental car when I made him pull suddenly to the side of the road so I could jump out and shoot this: 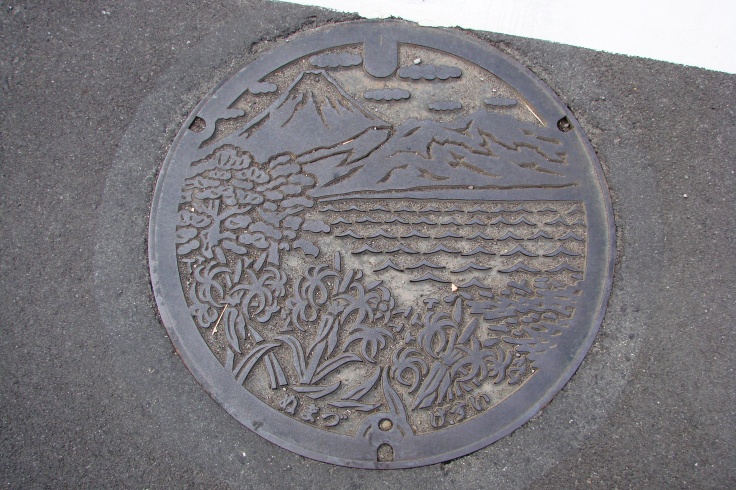 Thankfully, the cover clued me in to the name of the town (Numazu) but we didn’t need the design to remind of us the region’s big attraction. We’d been playing peek-a-boo with Mt Fuji that entire morning’s ride, catching tantalizing glimpses of it from the hill of a plum grove and watching the clouds zoom over the mountain’s crest in their own weather pattern so different from the plains below.

Numazu is often seen as just a gateway city to the Izu Peninsula but there are plenty of hot springs in the vicinity and a beautiful shoreline as well. If you find yourself stuck here for any reason, make sure to have a cup of tea – Shizuoka perfecture is one of the nation’s top tea-producing areas.