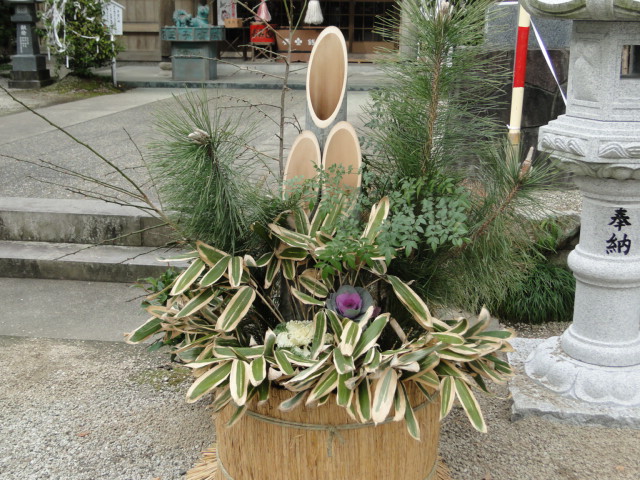 You might laugh, but in four years of living in Japan, I’ve never properly celebrated the New Year. Our first year, we actually went to Singapore. Fireworks over the bay were amazing but definitely a far cry from being in Japan! And for the past three years in Okinawa, we’ve been surrounded by a mostly American community.

So this year, I’ve really been enjoying some of the visible celebrations of the New Year. Here are a few things you might notice yourself if you’re traveling in Japan for the holiday:

Shimekazari – You can technically see shimenawa (sacred ropes) any time of the year. They’re the thick straw cords that hang around trees or from shrine gates, marking the area where a god (or kami) supposedly inhabits. A New Year’s shimekazari, however, is more elaborate. I’ve been seeing them on sale everywhere for the past few weeks (grocery stores, hardware stores, the mall …) – my neighbors have them hanging above their front doors and I’ve also seen one or two on the front of cars.

Kadomatsu – These pine and bamboo arrangements are also crowding the stores these days. They’re placed outside the front door of a home or business, always in pairs, and are said to ward off evil and give the home’s dwellers the power to resist old age (who doesn’t want that?). The pine represents strength and longevity; the bamboo signifies resilience and rapid growth.

Nengajo – I’ve never been a big one for sending Christmas cards but this year, I’m making the attempt to send out a few nengajo, or New Year’s cards. You can find these all over, especially in Japan’s numerous stationary stores.

Hatsumode – You won’t notice this New Year’s tradition unless you’re purposely hanging out at the neighborhood shrine. Hatsumode is the first trip to a shrine for the New Year; many people still go wearing kimono, in accordance with tradition. You’ll also find a lot of people on mountaintops in the first few days of 2013, in attempts to catch the first sunrise of the year.

So, dear readers, wherever you are in the world, I wish you a safe and happy New Year. Maybe I’ll see some of you in Japan in 2013!