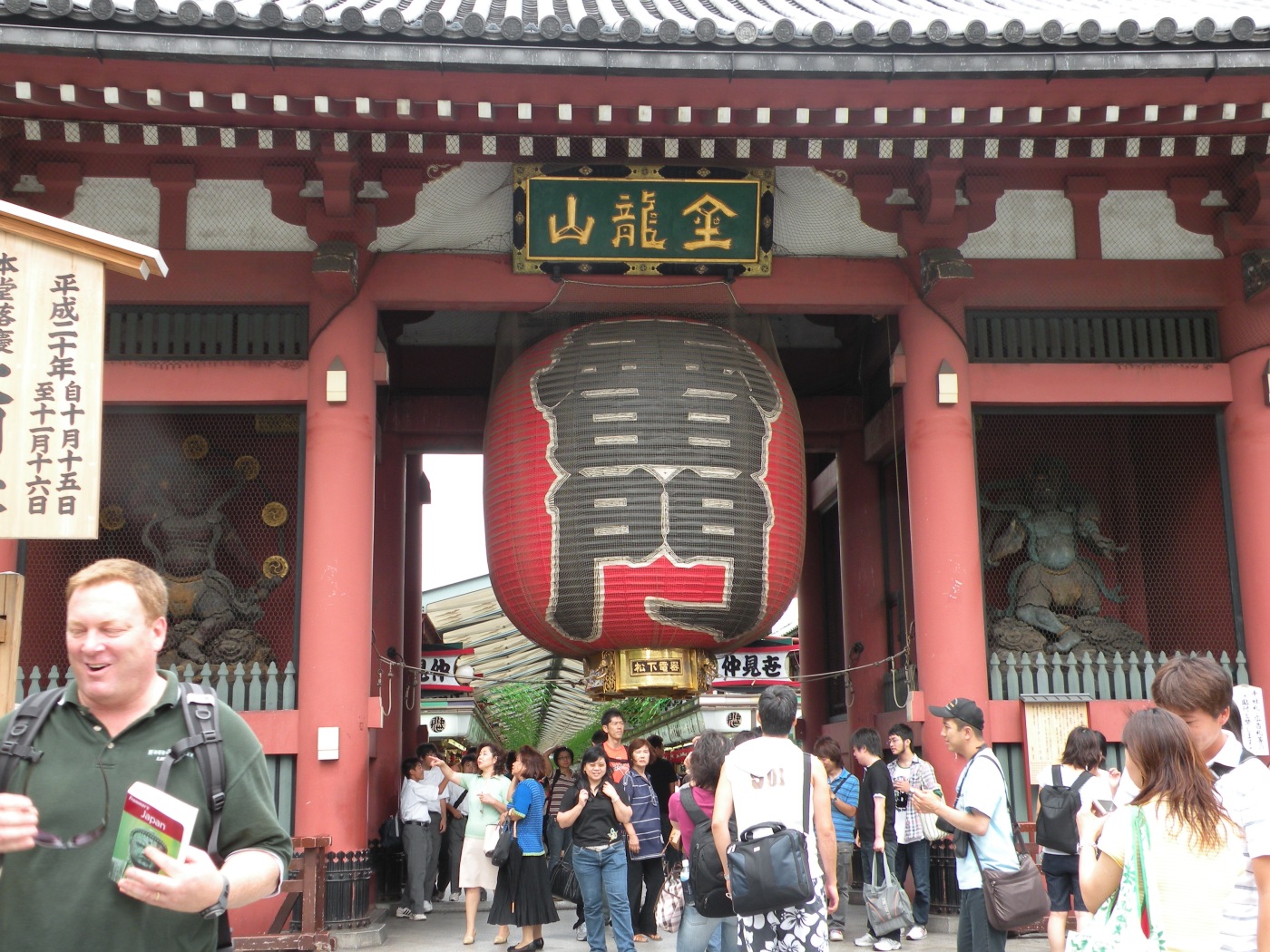 I love Asakusa. I know, I know, it’s one of Tokyo’s most touristed neighborhoods, but somehow that only adds to the appeal. The city’s oldest temple, the city’s newest (and tallest) building, tasty treats from the Edo era and a host of little secrets hidden in the backstreets … some places in your guidebook may not be worth a visit, but Asakusa should top any Tokyo visitor’s list.

Old Tokyo may have been mostly wiped out by 20th century disasters, but pockets of it still flourish in the Asakusa (ah-SOCK-sah) neighborhood of northeast Tokyo. Here you’re more likely to trip over rickshaw drivers than salarymen. Once considered a bastion of bawdy behavior when music halls and brothels took up residence in the area, the nightlife has moved on but the crowds continue to come. The biggest draw is Sensoji Temple, occupying a huge chunk of real estate near the river.

Before you even see the temple, you’ll have to pass under the Kaminarimon. Meaning “thunder gate” it’s protected on either side by its resident deities – Fujin, the god of wind, on the right and Raijin, the god of thunder, on the left. Check out their statues. The heads are from the Edo Period (1603-1868) while the bodies are more recent creations. The large red lantern in the middle of the gate sports the two kanji for “Kaminarimon” (read top to bottom). The lantern was actually a gift to the temple from the Matsushita Electric Industrial Company, more popularly known as Panasonic.

Cross under the gate and you’re at the end of Nakamise-dori, or “inner shopping street”. Home to nearly 90 stalls peddling everything from postcards, keychains and cheap toys to quality fans, dolls and kimono accessories,  you could easily spend several hours in this one alley alone. A number of the shops in this street have been here for generations. An edict by the shogunate in the late 17th century allowed locals living in residences along Nakamise-dori to put out small stalls, in exchange for keeping the neighborhood clean. With the steady stream of temple visitors and the Japanese custom of not returning empty-handed from a trip, the shops along Nakamise-dori continue to do a brisk trade to this day.

Besides Sensoji and its multiple outbuildings, don’t miss these other neighborhood gems:

Looking to book a Tokyo itinerary? I always include my self-guided walk to Asakusa. Tested by others and consistently updated (for one year, they had completely torn down the Tourist Office for renovations … the start of the walk had to be moved!), it’s been mentioned as a highlight of any trip to Japan.