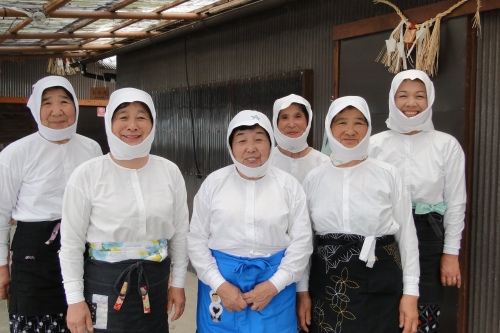 A few years ago when I was living in the US, the Discovery Channel ran a series called Discovery Atlas. In it, they took several countries (I remember Italy, Brazil and Japan at least) and profiled them in depth by offering not only a geographical overview but by following the lives of five or six natives of a particular country. In the Japan episode, I can quite clearly recall the scenese of an elderly woman diving for pearls. It was intriguing and I never forgot it. So when it came time for me to do another travel article for the Japan Times, I immediately set about tracking down the “ama” (pearl divers) and arranging a visit.

To be a little more specific, the ama are women divers who gather abalone, other shellfish and – once upon a time – pearls from the bottom of the sea floor. There were once nearly 6000 ama in Mie Prefecture (southwest of Nagoya) alone, but numbers have dwindled to the mere hundreds. Of those who remain, most are over 50 years of age. In more impressively, they (still) dive unassisted, with no breathing apparatus. Ama-san traditionally wear white uniforms, though nowadays you’ll see many of them sporting wetsuits to help combat the chill.

My time with the ama was spent in their hut in the seaside village of Osatsu. Ama huts were used by divers to warm their bodies between dives. Reiko-san (in the blue apron in the pic above) was my gregarious hostess, a nearly 81 year old woman  who would still be diving if she weren’t so busy entertaining tourists. The program they’ve set up is an enterprising one, managed by Reiko’s son – visitors can come and share either a snack or lunch with the diving women. The seafood based meal options are prepared onsite over the hut’s firepit – my own snack consisted of a sazai (a snail harvested just offshore by the ama themselves that morning) and two ousara, clams that were cooked in their own juices.

While we feasted, I got to ask Reiko-san questions, thanks to the help of an interpreter. As it turns out, she’s been diving since she was 10 years old, can hold her breath for about a minute, and would have been a schoolteacher if she hadn’t followed in her mother’s footsteps to become a diver. She was shockingly well-travelled – I admit to originally thinking that a person who engaged in such a traditional profession might never have left her home country. But Reiko has not only travelled the Japanese archipelage from top to bottom – several times over – she regalled me with stories of her cross-country Canadian train trip and her escapades in Australia.

You can read more about my visit with the ama in my recent Japan Times article. If you want to visit the ama yourself, contact them via their website or leave the details to me with a personalized itinerary.