This post is part of a series on artistic manhole covers around Japan.

The Olympics are over and I’m sad to say I’ve missed most of them. It seems that every Olympic year, I’m traveling or have just moved and have no access to a TV (and I’ll spare you all the rant on how NBC blocks online coverage for overseas viewers). But I did manage to catch the closing ceremonies last night, and as always, it left me feeling psyched for the next Games.

Today’s manhole cover, however, takes us into Olympic history. You’ll find this one gracing the streets of Nagano. 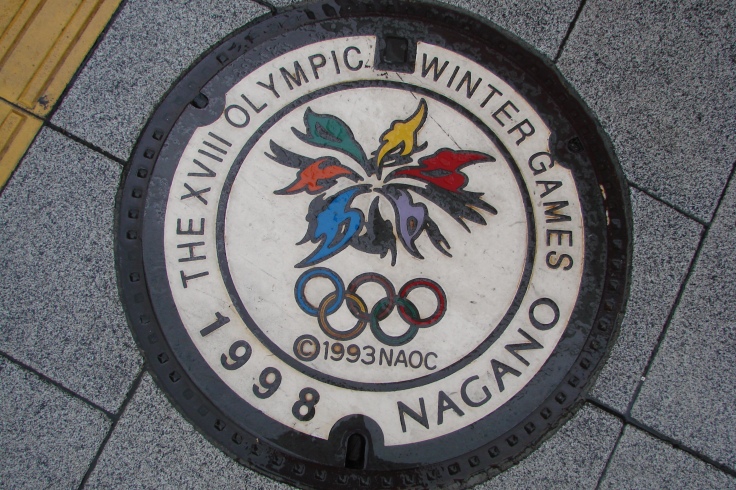 Nagano hosted the Winter Games of 1998 from February 7-22. It was the first Winter Games to include women’s ice hockey, curling, and snowboarding. Denmark won their first ever winter Olympic medal, 15 year old figure skater Tara Lipinski became the youngest competitor ever to take home an individual gold, and Norwegian cross-country skiier Bjorn Daehlie became the most decorated athlete in Winter Olympic history, with 12 career medals (8 of them gold).

Nagano’s day in the sun was a long time ago; now, for the most part, it’s a quiet prefectural capital in the mountains. Winter does see the ski resorts crank up their lifts and this is a great place to test the powder on Japan’s slopes; in summer, quiet hiking is just a bus ride away (my favorite place being the Togakushi region). Since living in Japan, I’ve made four trips to Nagano – it was our first “city escape” and one that will always hold a special place in my book.

Want to see firsthand what I love about this region? Contact me for a personalized itinerary and I’ll share with you the best Nagano has to offer.