The medieval gem of Himeji castle is currently undergoing a multi-year restoration and the remains of Edo Castle (now the Imperial Palace) aren’t really all that interesting, in my opinion. So where should a traveler go for a good castle experience in Japan? Head for the hills – of Nagano Prefecture, that is – and check out the impeccably preserved Matsumoto Castle.

Matsumoto Castle (Matsumoto-jo in Japanese) stands in the center of Matsumoto City, a sizable town on the edge of the Japan Alps in Nagano Prefecture. Its nickname is Crow Castle, a nod to its black exterior (one of only a handful of castles to sport this color). The outside shows five stories, but like all good castles, there’s a sixth floor hidden inside. A smaller, moon-viewing pavilion (great for sake parties) stands slightly apart from the main building and the whole scene is offset by a brilliantly-red zig-zag bridge crossing the moat on the castles western side. 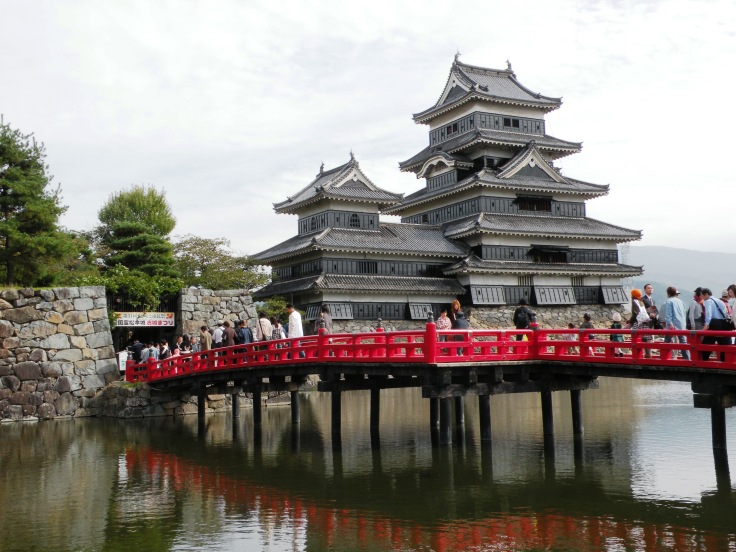 If Matsumoto-jo looks like it’s barely ever been scratched, that’s because it hasn’t. The castle was built in the late 1500s, near the end of the Warring States Period, when things in Japan were in constant upheaval. With the decisive victory of Tokugawa Ieyasu over his rivals and his establishment of a strong shogunal government by 1603 (don’t worry – we’ll cover the Tokugawas in a Crash Course soon 🙂 ) Matsumoto quickly became nothing more than a pretty sight. Though heavily fortified it was never attacked, nor was it ever bombed during the Second World War. It now holds the distinction of being one of only four wooden castles in Japan remaining in their original form.

If you visit Matsumoto-jo, bring slip on shoes as you’ll be leaving them at the entrance or toting them around in a plastic sac. The floors inside are polished wood and in fall and winter, they get COLD. Bring thick socks. You can climb all the way to the top floor but be warned – the stairs are steep and seem downright vertical the closer you get to the top. But it’s worth it to see the view from on high. There are exhibits to view on the second and third floors, mostly having to do with samurai armor and a few old scrolls. English panels are on the wall, and if you want a bit more information, the city usually has Goodwill Guides on hand at the entrance. They run off of a script but their English is good and they’re very eager to show you around.

Matsumoto’s not an easy day trip from Tokyo; it’s at least 2.5 hours via train or bus. It’s better to tie it in to a long weekend in the Japan Alps. Guaranteed that after a few days in one of my favorite regions of Japan, you’ll find it awfully difficult to leave!

Matsumoto City runs a decent website with some information on the castle itself.